What is the Anterior Cruciate Ligament (ACL)?

The anterior cruciate ligament is a 3-3.5cm band of fibrous tissue forming one of the four main ligaments in the knee which work together to prevent excessive movement of the knee joint.

How does the ACL get injured?

Most commonly the ACL is injured during sporting activity, usually not through contact, but from pivoting or landing from a jump. A frequently reported mechanism from skiing is when bindings fail to release and the knee is twisted. ACL tears can also occur from high energy trauma such as car accidents and high falls. 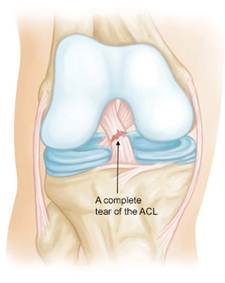 Who gets ACL injuries?

Athletes playing sports such as rugby and football are at a higher risk. Females are at an even higher risk due to generally smaller ligaments and increased laxity.

The most common symptoms patients report when sustaining an ACL injury are of sudden knee pain and of the knee giving way, followed by knee swelling. Whilst the swelling and pain will improve, patients are often left with ongoing knee instability. The knee becomes unstable on any form of twisting movements especially whilst running.

During your orthopaedic consultation, history and examination findings would help with the diagnosis, including using special knee stability tests.

Imaging techniques including X-rays and MRI would be used to assess the knee and also to identify other associated injuries.

Surgery is indicated if you need an intact ACL to continue playing sports and/or have signs of knee instability. Surgery involves removing the damaged ACL, and reconstructing a new one using grafts, typically using segments from your own hamstring muscles.

Intensive physiotherapy is used to maximise knee strength and stability, whilst teaching you to avoid positions and movements that would worsen your symptoms.

Some patients find modifying their lifestyle and choice of sports to avoid knee twisting movements, and physiotherapy returns them to their previous level of function and avoids surgery.

Most people return to their normal daily activities in 2 weeks, and return to non-competitive sports 4-6 months after the surgery and competitive at 9-12 months.