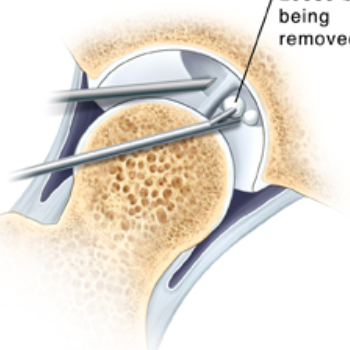 What is Hip Arthroscopy?

Hip Arthroscopy is most commonly performed to treat Femoro-acetabular impingement. In almost every case bone is removed around the hip joint (CAM or Pincer lesions) and the labrum is repaired (or partially removed if irreparable). Many patients will also have some degree of localised cartilage damage and this may either be tidied up (chondroplasty), or a procedure to cover exposed bone is performed (microfracture). I also perform a regenerative procedure to cover exposed bone and replace it with a more cartilage-type material (ABICUS procedure).

What is involved with Hip Arthroscopy?

Specialised equipment is used for hip arthroscopy; the leg is placed in traction and instruments are inserted into the joint to gain access 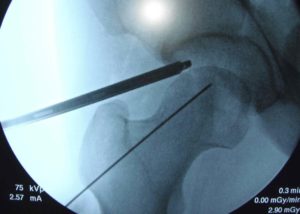 Hip arthroscopy is performed under general anaesthetic (GA). Three small (approx. 10mm) keyhole incisions are made allowing us to pass small camera’s and instruments. Once access is gained, the femoral head and acetabulum (socket) are viewed. The labrum is repaired if necessary. 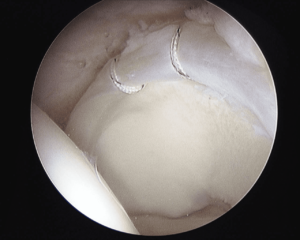 Once the labrum is repaired any cartilage damage is assessed.

Image showing very minor cartilage damage adjacent to where the labrum has been repaired.

Sometimes the cartilage damage can be severe with a full-thickness defect with underlying exposed bone.

In these instances, the tears are trimmed and tidied up and microfracture is performed to stimulate bleeding. This forms a clot and covers the exposed bone with a layer of fibrocartilage. 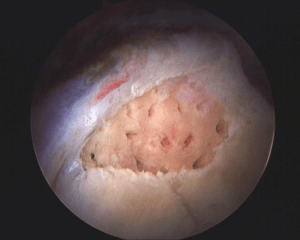 Although your hip will be sore post surgery, you shouldn’t experience any severe pain. You will be on crutches for 4 – 6 weeks (depending on what exactly was done during the arthroscopy) and won’t be able to drive for this period.

As we do pull on the leg quite hard during the procedure (this is to enable us to get a good look inside the hip joint) there may be some numbness around the groin area but this should resolve in a few days, occasionally weeks.

The main indication for hip arthroscopy is surgery to alleviate femoro-acetabular impingement (FAI). The overall improvement rates for FAI are 80%.

Outcome is influenced by the presence of arthritis, patients with arthritis who undergo hip arthroscopy have an approximate 40% chance of improvement.

Those patients with severe damage at the chondrolabral junction (i.e. localised cartilage damage without widespread arthritis) are more unpredictable in outcome (between 40 and 80% depending on the cartilage damage).