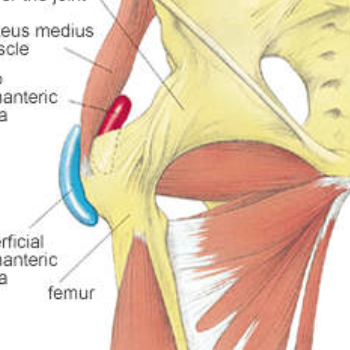 What is Trochanteric Bursitis?

Trochanteric bursitis is inflammation of the trochanteric bursa. The trochanteric bursa sits on the side of the hip working – helping as a lubricant for the movement of the muscles of the hip joint.  Occasionally, the bursa can become inflamed for no obvious reason. It is commonly seen in patients with rheumatoid arthritis, hip joint disorders, a tight iliotobial band or who have suffered an injury. It is increasingly common with advancing age.

It typically causes pain felt in the outer thigh. This pain worsens with long walks, stair climbing or prolonged standing.  The leg will be tender meaning that lying on the effected side often produces discomfort. Patient especially notice this at night.  There may be associated muscle weakness causing a limp or an unsteadiness when on one leg.  Most patients report a gradual onset of increasing discomfort over weeks or months which fluctuates with activity levels. 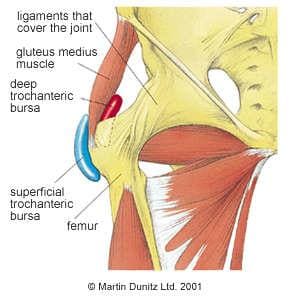 What is the treatment for Trochanteric Bursitis?

The commonest condition it is confused with is an abnormality of the hip abductor muscles (gluteus medius and minimus). This can range from a tendonitis to a muscle tear. Ultrasound is very effective in distinguishing between the two conditions, and an injection (usually a steroid) can be administered at the same time.

Most patients respond well to non surgical treatments.  The main treatment is sustained physiotherapy. Medications are often used such as a short course of anti-inflammatory tablets and intermittent steroid injections. Recovery usually takes a number of months.

Surgery is usually considered only after other treatments have been attempted and proven to be ineffective.  Most often arthroscopic surgery (keyhole surgery) is used.  The tight band of tissue on the side of the hip (iliotibial band) is released and the inflamed bursa removed.  If present, a torn or damaged abductor tendon can be repaired at the same time.