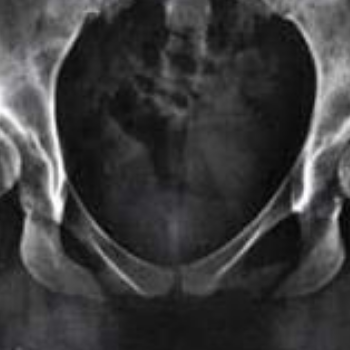 What is Acetabular dysplasia?

Acetabular dysplasia, also known as developmental dysplasia of the hip or congenital dislocation of the hip, is a condition defined by inadequate development of the acetabulum. The hip socket (acetabulum) is shallow and “dish shaped” rather than deep and “cup shaped”. It is associated with a subtle abnormality of the hip joint at birth (congenital hip dislocation). Milder forms exist and it can remain undetected for many years, until symptoms develop in the third decade of life. 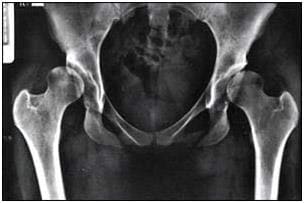 A radiograph showing severe acetabular dysplasia – note the shallowness of the hip socket, and ‘uncovering’ of the femoral head.

What is the natural course of acetabular dysplasia?

Abnormally shallow hip joints are predisposed to progressive damage to the cartilage, leading to osteoarthritis. Acetabular dysplasia is one of the leading causes of hip joint osteoarthritis, particularly in women. In the early phase patients experience groin pain due to the acetabular labrum (a lip of tissue surrounding the hip socket) either tearing or fraying. This process can progress to osteoarthritis.

Acetabular dysplasia causes symptoms when enough damage has occurred in the joint, usually starting with mild groin discomfort.  Once the joint becomes painful, gradual deterioration of the hip joint can reliably be predicted, although the time course is unpredictable.  A reduction in activity levels may reduce symptoms.

Most patients experience ongoing discomfort which gradually worsens over many years, even decades. Patients with very shallow hip joint sockets who have developed symptoms around the age of 20 rarely get beyond their early thirties without requiring an artificial joint replacement.

What is the treatment for acetabular dysplasia?

Hip arthroscopy (keyhole surgery) can remove symptoms due to tearing of the labrum. If no damage to the joint has occurred then acetabular osteotomy can be performed which is a procedure to ‘cover the femoral head’. This involves breaking the bone around the hip socket and ‘re-setting’ it. In advanced cases, hip replacement is the surgical treatment for acetabular dysplasia.

There are a number of considerations in deciding the best time to do this operation.  Artificial joint replacements are reliable and safe. However, younger patients have a much higher chance of needing a repeat hip replacement over their lifespan. In selected patients, early surgical intervention can slow or prevent the progression of joint damage and improve symptoms.